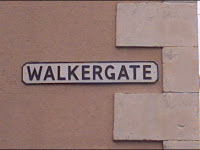 As I've been chronicling the ongoing and ever-expanding saga known as Walkergate, or the John Doe investigation into the illegal campaign activities of Scott Walker and his county and/or campaign staff members (they are often interchangeable), one thing stood out.  It appeared, at least until the first arrests, that this was one happy little family of GOP operatives working cheerfully together on their one objective - getting Scott Walker elected at all costs.

However, as is often the case, it is growing increasingly apparent that the phrase "There is no honor among thieves" still holds true.  Instead of one big happy family, there appears to have been some infighting going on among the ranks, which may be about to spill over in a big way.

In an article that is well worth taking the hit on the JSOnline paywall, Steve Schultze reports on some newly-released transcripts that prosecutors filed with the courts on Wednesday, when Kelly Rindfleisch appeared in court.  At the court hearing, Rindfleisch entered a plea of not guilty and her attorney submitted two motions.  One was to have the case dismissed outright on the basis of universal immunity and the other was to have the case transferred to Columbia County.

The change of venue in itself is interesting in that while her permanent address is in Columbia County, and she voted in Columbia County, her Milwaukee County employment papers and the criminal complaint shows that she was living in a home in West Allis, which was owned by Jim Villa, another one of Walker's top county/campaign aides and apparent good friend of Rindfleisch.

The transcript is a history of online chats between Rindfleisch and Villa.  According to Schultze's report, some of the chats were exchanges of adolescent "what do you want to be when you grow up" kind of fantasizing, discussing various positions they would hold in Walker's administration.

Even then, Walker's cronyism was so well-known that the banter between these two wasn't so much wishful thinking as it was a list of expectations.

But that's not the juicy part.

The good stuff comes in when they start talking about their teammate, Tim Russell, behind his back:


The Rindfleisch-Villa chats include some catty commentary on other Walker county staffers.
Russell has just lost his privileges to the county executive's suite, according to a March 30 exchange.

Russell set up a secret email network in Rindfleisch's office earlier in 2010, according to her criminal complaint.

In a chat with Villa two weeks earlier, Rindfleisch says she'd avoided telling Russell she had been promoted by Walker from policy aide to deputy chief of staff - Russell's job.

"I've kept quiet because I don't think Tim knew I knew (about her promotion) and I didn't want to offend him," she says. "It's not like I earned it. No one else in the office is capable," Rindfleisch tells Villa.

Villa reassures her she has the "political chops" to handle the job. "YOU are the political operation in that office now; Tom is an IDIOT," Villa writes. He doesn't identify who Tom is, but the only Tom working in Walker's county office at the time was Nardelli.

Villa opines in the online chat that "Keith will work better with you than with Tim" Russell. The transcripts don't spell out who Keith is, but hint at a direct connection between Walker's campaign staff and his county staff. Walker's campaign manager was Keith Gilkes.

Raising cash for Davis was "tough going," according to Rindfleisch.

"Nobody cares about Lt. Gov.," she says.

Well, that pretty much cooks Rindfleisch's goose.  It verifies that she was campaigning for both Walker and his choice of potential lieutenant governors, Brett Davis, while she was on the taxpayers' dime.

This little exchange also implicates that Walker's campaign manager, Keith Gilkes, who was in Walker's administration, was in the middle of the illegal campaigning.  I bet he really loved working with Cullen Werwie, who was given immunity, presumably for ratting on all of them.

Even better than that, this exchange goes farther than anything else to this point at implicating Tom Nardelli.  Nardelli was Walker's Chief of Staff at Milwaukee County and ended up in some cushy state jobs until he suddenly quit. Well, this would explain why people who know Nardelli have told me he's been looking a bit haggard since retiring.  It might be that he is afraid of losing all of his pensions (he has three or four of them).

Not too long ago, Mike Nichols, a right wing hack who appears in various publications, including the Bradley Foundation-supported WPRI, recently defended Nardelli for being the apparent stand-up kind of guy in Walker's administration.  I wonder if he'll be retracting that soon.

If Nardelli was in on all this corruption, which seems more than likely now, the person who would be loving this the most is my late grandfather, who knew Nardelli and said he was a "no good bum."

But even though the Nardelli stuff is juicy, it's still not the juiciest part.  Even juicier is the stuff about Tim Russell.

According to Rindfleisch and Villa, Russell did something to get in Walker's bad graces.  That would explain why he was banished from the courthouse and put in the Housing Division in a different building altogether.  It would also explain why in the spring, while Russell was travelling and illegally campaigning with Walker on his Harley Davidson tour of the state, he was acting like a good sycophant, almost to the point of debasing himself, as depicted in the different videos taken during that trip.

The thing that struck me most about this is what must be going through Russell's mind right about now.  I have already questioned what his financial situation is like.  I have also been told that Russell is feeling a bit salty because Walker and the others have thrown him to the wolves, so to speak. Sources have told me that he's been trying to raise money for his defense, including trying to sell some of those domains he owns, but his former friends have turned their backs on him.

Now he sees that the people he considered his colleagues, his friends and his brothers and sisters in arms, were trash talking him behind his back.

He must be thinking about those embezzlement charges he is currently facing, as well as being fully aware that he could easily have more charges added at any minute.  The child enticement charges filed against his partner, Brian Pierick, refer to a partner and co-owner of the phones they were using.  Rindfleisch's complaint points out how he set up the secret rotor that they were using to campaign with and avoid open record requests. It's been pointed out that he was supervising Darlene Wink's campaigning while they were both supposed to be working in the county executive's office.

In other words, he's facing a world of hurt, legally speaking, and now finds that his friends not only abandoned him, they were using him and treating him like garbage all the while.  He's got to be wondering why he should show any of them any loyalty anymore.

But even Russell isn't the juiciest part.

The juiciest part is the one that's hardly mentioned in the article - Scott Walker.

Look at what Walker is facing:


And that's just the things we know of.  There's no telling how many other people there could be facing their own share of trouble, including John Hiller, his former campaign treasurer and Andrew Jensen, commercial real estate mogul.

What do you think the odds are that one or more of these people will decide to cut a deal for themselves, like Wink did, and be willing to spill their guts regarding Walker's involvement in all of the illegal activities?  After all, what kind of loyalty or support has Walker shown them as he's been flying back and forth across the country to raise money to defend against the approaching recall and to pay for his legal cooperation fund?

What do you  think the odds are that Walker is drinking Maalox by the gallon by now?

What do you thing the odds are that we'll be seeing an image much like this one? 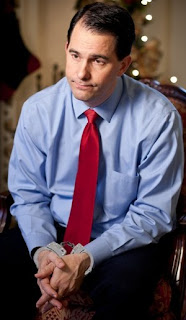 I don't know what the odds are, but I'm going to go fix me up some popcorn for this one.