The Silence of The Kittle


Matt Kittle had a vendetta last year against a Germantown Kindergarten teacher,who had a few beers at a county fair and ripped up a Republican yard sign. Kittle felt that a teacher on summer break, ripping a yard sign, was unpardonable and he made it his goal to get her fired,.

Now as Capper and I both pointed out yesterday, Scott Walker, encouraged and condoned an attack on a protester at the Iowa State Fair.


Video of 2 front-row @ScottWalker protesters during soap box in Iowa. Others in crowd & then followed to newser pic.twitter.com/PckTqWxlhS
— Vaughn Hillyard (@VaughnHillyard) August 17, 2015


Not a single word from Kittle, condemning this action by the Walker goons or Scott Walker himself.   I thought that he would for sure be calling at least for the outing and firing of the two thugs who grabbed the peaceful protester if not Scott Walker himself for goading on his goons to take care of his problem.

Apparently Violence against people who disagree with you is acceptable and encouraged.

PS:  Dave Blaska, who left this comment, also has been mum on this incident. 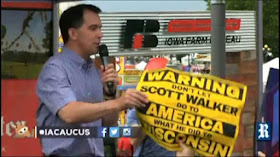