Missouri Trump Supports Came To Kenosha To 'Pick People Off' 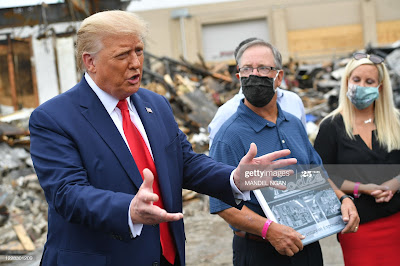 Two MAGAts from Missouri, Michael M. Karmo, 40, and Cody E. Smith, 33, were arrested by federal agents in a hotel near Kenosha. In their possession were a AR-15, a 12 gauge shotgun, a 9mm handgun, a homemade silencer, lots of ammo, several knives and some pot.
That's not the surprising part. It's almost a given nowadays that any MAGAt is also a gun nut.
The really outrageous part is why they had come all the way up from Missouri:

A law enforcement agency alerted the Kenosha Police Department to the two men, and Kenosha police alerted the FBI that Karmo and an unidentified male were traveling to Kenosha to "look and 'pick people off.'"

Karmo said he and Smith were roommates for about four weeks and were part of the 417 Second Amendment Militia. He also claimed to want to see what "Kenosha was like at night," and the group planned to go to Portland to see what was going on and were willing to "take action" if police were defunded.

Apparently, our homegrown domestic terrorists aren't good enough, they have to ship them in from othere states.
Undoubtedly, they were partially inspired to be copycats of Kyle Rittenhouse, the 17 year old that gunned down and killed two people in cold blood and injured a third person.
But this is the kind of crap the country has to deal with mostly because of Trump's decisive, racist comments. It would not be surprising if Trump soon praises these dirtballs as "American heroes," offers them pardons and invites them to his next rally as guest speakers.
capper at 10:42:00 PM
Share