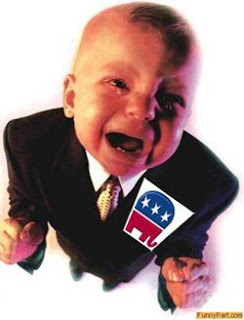 Unless the gentle reader is living in a cave with no contact with the outside world, they are aware that Republicans are having a very difficult time accepting the reality that Trump lost the election a few weeks ago.  It is unfathomable to them that the majority of voters would reject Trump, who is their lord and savior.

And there are none worse than those in Wisconsin.  Even before the election, they followed suite of Trump by throwing around baseless conspiracy theories of voter fraud, election fraud and other easily debunked lies.

Then, at Trump's request, Wisconsin needed to do a recount.  But instead of doing the entire state, Trump singled out just two counties, Dane and Milwaukee.  This was not by accident.  Dane and Milwaukee Counties are not only the two biggest Democratic strongholds in the state, but they also are the home of the two largest minority populations.

Since the recall started, Republican observers have done their best to obstruct the process.  They complained about not being close enough to see the ballots and myriad of other details.  But despite supposedly not being able to see the ballots, they managed to find enough to challenged tens of thousands of these ballots. Even if they managed to win half of the challenges, it would be enough to change the outcome of the state's election.

The gentle reader should be made aware that this wasn't just an act of desperation on the Republican's part, but their actual stategy, as outlined by James Wigderson, a right wing blogger who said the quiet part out loud:

The plan is to challenge enough early absentee ballots and mail-in ballots to randomly draw down enough ballots in Milwaukee and Dane Counties to give President Donald Trump the lead in Wisconsin.

To throw out the early absentee ballots, the state Republican Party is claiming that every person needed to fill out an application before. receiving a ballot to vote early in person. However, they are not challenging the early votes anywhere else but in Milwaukee and Dane Counties.

Because there is no way to connect the ballot with the early voter, a ballot would have to be drawn at random to be thrown out.

In addition, the Republicans want to throw out the ballots of the "indefinitely confined." Legislative Republicans included that provision in their voter ID law to avoid disenfranchising elderly voters. A lawsuit prevented Dane County from abusing that provision, but not before thousands followed the bad advice of County Clerk Scott McDonell. It's no irony that the GOP would now use the law to protect the elderly vote against elderly voters, it's the plan.

Meanwhile, a Republican State Representative, Joe Sanfelippo, actually had the gall to suggest that the whole election results be tossed and that the electors be put into the hands of the Republican-controlled legislature.

Now, a conservative group, Wisconsin Voters' Alliance, has taken Sanfelippo's bizarre train of thought even further by filing a lawsuit with the Wisconsin Supreme(ly Corrupt) Court, asking that the election results be declared null and void.  The difference this time is that their lawsuit is based on the supposed undue influence of Mark Zuckenberg donating money to certain areas to help get the election done despite of the COVID 19 pandemic:

The lawsuit, brought by the nonprofit Wisconsin Voters Alliance along with a number of individual voters, makes a number of unsubstantiated and far-fetched claims about Wisconsin's elections process, some of which are similar to those made by President Donald Trump's campaign in the ongoing recount in Dane and Milwaukee counties.

Central to the lawsuit is the allegation that several Wisconsin cities — Madison, Kenosha, Racine, Milwaukee and Green Bay — unlawfully accepted $6 million from the Mark Zuckerberg-backed Center for Technology and Civic Life to help conduct the Nov. 3 election.

The group particularly objected to the cities' work to promote absentee voting, which it characterized as an effort to help President-elect Joe Biden's campaign. Biden won the state by more than 20,000 votes, according to county canvasses. The result is scheduled to be certified Dec. 1.

Wisconsin's political parties both chose a slate of electors in October. The political party whose presidential candidate is the certified winner in Wisconsin will get all the state's electoral votes.

I'm more than a little surprised they didn't include their favorite bogeyman, George Soros.

This same group had filed another lawsuit in October in federal court asking that the money be blocked, but the federal judge had rejected their request because "the plaintiffs failed to show a reasonable likelihood of success on the merits of the case."

The not so hidden irony in all of this is that there is little reason to believe that this group isn't funded by conservative special interests dark money themselves.