WISGOP: No Democracy For You! 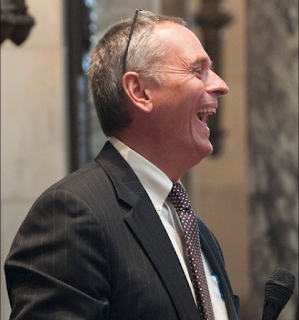 It is no deep, dark secret that Republicans hate, hate, hate democracy.  But the actions taken - and not taken by them regarding the 2020 elections is absolutely appalling, even for them.

It was not surprising that the number of absentee ballots being cast in Wisconsin was staggering.  Everyone saw it coming.  Democrats and Republicans alike were urging people to be smart during the COVID 19 pandemic and vote absentee and to get their ballots in early.

But when the elections clerks asked for some help, not only did the Republicans do nothing, they actively fought against any common sense efforts to make the counting of the millions of ballots more efficient.

When the clerks asked for permission to start counting the day before the elections. The Republicans said no.

When the clerks asked to be able to run the ballots through the machines, the Republicans again said no.

Well, the all too predictable happened and Trump lost not only Wisconsin but also the presidency.  He immediately launched the mother of all temper tantrums and started to wildly spew baseless claims of voter fraud, election fraud and all sorts of shenanigans.

Wisconsin Republicans were all to happy to repeat these asinine claims, citing problems that stemmed directly from their own unwillingness to improve the efficiency of this election.  Robin "It's perfectly safe" Vos went so far as to order the Republican controlled assembly elections committee to do an investigative audit of the elections to find the fraud that wasn't there.

If these accusations were accurate, you just have to admire the cleverness of the Democrats, who, based on these blatantly false accusations, were able to swing enough votes to seize the presidency while still losing ground in congress and not changing the state legislature enough to make a difference.

But State Representative Joe Sanfelippo, who sits on the committee, took it 50 steps further.  Sanfelippo made the absurd - and highly illegal - suggestion that the results of the election just be scrapped or that the electors change their votes to be in favor of Trump:

Assembly Speaker Robin Vos has called for an Assembly committee with subpoena powers to oversee an investigation into potential fraud surrounding alleged “concerns surfacing about mail-in ballot dumps and voter fraud” in Wisconsin. And the vice chair of that committee, Rep. Joe Sanfelippo (R-New Berlin) says the committee may need to overturn Wisconsin voters’ choice of Joe Biden and conduct a new election or order electors to vote instead to give the state’s 10 Electoral College votes to Donald Trump. Legal experts say either action would violate state and federal law and is beyond the power of the committee.

“If an investigation shows these actions affected the outcome of the election, we need to either declare this past election null and void and hold a new election or require our Electoral College Delegates to correct the injustice with their votes,” Sanfelippo said in a statement Monday. He claimed — without providing evidence —  that there was insufficient voter purging by the Wisconsin Elections Commission and that clerks in Dane and Milwaukee counties “colluded” to keep unverified names on voter lists and began voting too early. Those allegations were “just the beginning” Sanfelippo said.

Realizing how insane they sounded, Republicans started to back pedal away from this.

Robin Vos, who was dead sure that fraud had been committed, changed his tune and admitted that they weren't going to find enough problems to make a difference in the final results.

As chair, Tusler makes it clear the committee’s goals are different.

“Joe’s statements are not the statements of our committee,” he says. “They are of a single representative and his feelings and his concerns about this election.”

First, says Tusler, information needs to be gathered, which is where witnesses — some of whom may be subpoenaed although he said that power may not be utilized — come in.

“I think that we, at this point, need to try to preserve the election that we have,” Tusler says. “I think we need to look into a lot of issues. And if there were some massive amount of fraud, it should be the case that we can remove that fraud from our results and our results just are different than they currently are. If there isn’t a vast amount of fraud, then there isn’t any reason to take that kind of drastic action.”

The worst part of all this is that we now have to wait another two years before we can try to correct the situation by voting out these democracy-hating, fascists.