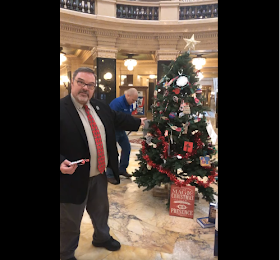 This year, their faux outrage hit new levels when Evers announced that since the Capitol Building was closed to the public due to the COVID 19 pandemic, there would be no tree by any name this year.  The move makes sense.  Why go through the hassle and expense of finding the best tree, chop it down, move it to the Capitol Building, get it inside and erected and decorated if no one was going to be able to see it?

It makes sense, that is, unless you're a Republican.  State Rep. Paul Tittl and Shae Sortwell bought a cheap artificial tree and erected it on the ground floor of the Capitol.  It was promptly removed by statehouse operations workers because they did not have a permit for the display.

So Tittl bought another cheap artificial tree, which met the same fate as the first one.

Now Tittl has scheduled an event for this week to put up a third tree, decorate it and sing Christmas carols. All lawmakers, legislative aides and other statehouse workers are invited. Tittl claims to have applied for a permit this time, but the committee that would approve such permits and which is led by one of his Republican colleagues, won't be meeting again this year.

This would be hilarious in its pettiness if it wasn't so outrageous on two counts.

The first offensive thing about this scheduled event is that these same Republicans banned people from coming to the building in 2013 to participate in a Solidarity Singalong.  At the singalongs, people would sing union protest songs regarding ACT 10 and other anti-worker laws.

Republicans were so outraged by the singalongs, they ordered the Capitol police to arrest the participants.  The police were arrest everyone and anyone, including disabled vets and little old ladies.

This practice was later ruled in court as being unconstitutional.

The even more outrageous part of this whole debacle is that the Republicans have not met for over eight months to take any action on the COVID 19 pandemic. Nearly 4,500 people have died from the virus. The total number of confirmed cases is more than ten times that number.  But the Republicans did not deem it a problem worthy of their attention much less taking any action.

But not to have a Christmas tree that no one will even see?! That simply will not do! I'm surprised that they haven't contacted Trump to ask him to send in soldiers to protect their cheap tree.  They'll probably decorate the damn thing with ornaments that look like little COVID viruses.

It's good to know that we Wisconsinites are less important than a fake tree that started out as a pagan symbol and was taken when the Romans usurped Samhain as a holiday.