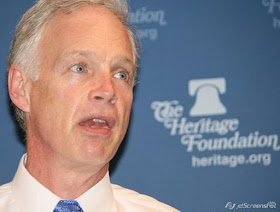 Ron Johnson is having a helluva week and can't get enough of making an ass out of himself.
It started when he held a sham hearing about the elections, using debunked conspiracy theories to lay the groundwork for future voter suppression laws.  Then he couldn't decide whether he would keep a campaign pledge to retire at the end of this term or if he was going to run for reelection.
Now, just a week before Christmas, RoJo dons his Grinch costume and single-handedly blocked not just one, but two, COVID relief bills that would have sent $1,200 to Americans who made less than $75,000:

But Johnson warned that lawmakers were continuing to take a "shotgun approach" to coronavirus relief.
"By and large, the initial relief packages here were a shotgun approach. We had to move fast, we had to do something big, we had to make sure that markets wouldn't seize, that financial relief could be sent to people very quickly," Johnson said. "And so we passed over $3 trillion in financial relief. I knew it would be far from perfect. It was far from perfect, but now we've had far more time and anything we consider for this additional package that we’re considering now, that’s being debated, that’s being discussed, that’s being negotiated ought to be far more targeted."
Johnson said he instead supported a program targeted for small businesses.
"What I fear we're going to do with this bipartisan package and what the senator from Missouri is talking about is the same thing, is a shotgun approach," he said.

I'm more than a little surprised he wasn't pushing for another big tax cut scam for the wealthiest of the wealthy instead.
After all, this is the same doofus that said "stimulus bills don't stimulate the economy," and wanted to lower regulations and tax breaks.

He instead proposes “lower regulation” and “a competitive tax system.” pic.twitter.com/tp7CYLY3mk

We all know how well that turned out, don't we?