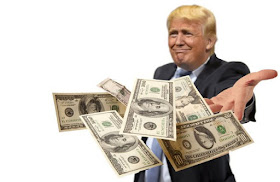 A couple of days ago, I had reported that even before the partial recount was completed, the frivolous lawsuits were flying in fast and furious.

In the short time since then, Trump has managed to add to his losses.  On Thursday, the Wisconsin Supreme Court chose not to accept Trump's case on a 4-3 basis, because state law requires for his legal team to have filed the lawsuit in circuit court first.  Even before ink was dry, Trump had filed appeals in both Milwaukee and Dane Counties.

What was disconcerting about the decision was not just that three of the four conservative judges had chosen to disregard the law and the constitution, but their irrational reasoning behind their decision.  In her dissent, Justice Rebecca Bradley, a Federalist disguised as a Supreme Court Justice, wrote this:

In a separate, scorching dissent, Justice Rebecca Bradley maintained that leaving legal questions to the Elections Commission "deals a death blow to democracy."

"The majority's failure to act leaves an indelible stain on our most recent election," she wrote in a dissent that Roggensack and Ziegler joined.

Later on Thursday, the Supreme Court also declined to hear the lawsuit filed by Wisconsin Voters Alliance, citing the ridiculousness of trying to have the entire election declared null and void.

On Friday, the Court also declined to hear the case filed by Dean Mueller because he did not like the absentee ballot drop boxes, was declined without explanation.

The latter two were decided by the same split of 4-3.

Also on Friday, it was learned that Trump's lawsuit filed in federal court faces a dubious future.  Federal Judge Brett Ludwig, who was appointed by Trump, expressed skepticism and questioned why this lawsuit had even been filed since they wanted the legislature to be given control of the 10 electors.  When Trump's attorney explained that they needed to find the election results to be flawed to that they could take it to the legislature, Ludwig turned up the heat on Trump's team:

Trump attorney William Bock said the president needed the court to determine the election that Biden won by about 21,000 votes was flawed so that the issue could be handed off to lawmakers.

Ludwig remained dubious that such a question was one a federal court could decide.

"I get the argument but I have a very, very hard time seeing how this is justiciable in the federal court," Ludwig said.

He added that Trump's lawsuit was "really bizarre" because it asks to "remand" the case to the Legislature, noting that remanding a case typically means returning it to a lower court for reconsideration.

"I think the term 'remand' might be inartful," Bock responded.

Ludwig put Trump in a bigger bind by scheduling the next hearing on December 19th, only four days before the electoral college meets to finalize their count.

As stated before, even if Trump would manage to turn the vote over, it wouldn't matter. Biden would still have enough to be the official winner.

But before you laugh and call Trump a loser, you should be aware that he is actually winning.  In my last article about this, I pointed out that these lawsuits were just a vehicle for him to put the squeeze on his supporters because he's gonna need as much cash as possible to pay off all his campaign debts and to fund a legal defense against all the civil and criminal lawsuits he will be facing on January 21at.

And it is working out for him:

.President Trump’s campaign and the Republican National Committee have raised more than $207.5 million in the weeks since Election Day, his campaign said Thursday, as their claims of voting fraud have generated a financial windfall that could be deployed in future political ventures.