WISGOP To Launch Yet Another Attack on Democracy 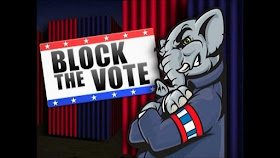 So far, democracy, and the election results of 2020 are still standing, despite multiple prongs attacks from all sides.  Although to be honest, the would be assailants, aka Republicans, more resemble the Bungling Brother Circus clown act than a serious threat.

Trump filed lawsuits on both the state and federal levels.  However, his attorneys are incompetent and failed to file the lawsuits properly with each court.  The federal case was rejected outright.  I suppose it didn't help when the attorney, Sidney Powell, submitted blank forms with the petition and outright lied on the parts she did fill in.

The cases on the state level are still pending, but they have only until Monday to resolve them.

Two other cases filed on the state level were denied a hearing by the Wisconsin Supreme Court.

The best part of the three state level cases being rejected by the Supreme Court was that each was due to Brian Hagedorn siding with the liberals and the Constitution rather than doing whatever his right wing special interest funders to him to do.  This sent almost every Republican into conniptions and made several heads explode.

Currently, Kenny Paxton, the Attorney General of Texas, has filed a federal lawsuit against Wisconsin, Michigan, Pennsylvania and Georgia in an effort to force them to order their electors to vote for Trump despite the fact that Biden had won each of those states. The common belief is that the only reason Paxton filed this lawsuit in the first place is that he fishing for a preemptive pardon from Trump for all of the misconduct while in office that put him under a federal investigation.

But now the Wisconsin Republicans are throwing everything they can - including the kitchen sink - in an effort to enforce fascism and kill off democracy.

Robert Spindell, one of the Republicans on the Wisconsin Elections Commission, which is supposed to be administering and protecting the elections, attended a MAGA "Stop the Steal" rally on Monday.  Not only did he attend, he spoke to his fellow Trumpanzees, using the same twisted logic and nonsensical talking points that is so popular among Republicans these days:

While he did not give any specific examples of voter fraud in Wisconsin, Spindell implied, falsely, that it had happened.

“There’s no evidence vote fraud did not occur,” Spindell said, calling for election officials to prove a negative.

Also, another member of the commission, Dean Knudson, has filed a complaint with his own commission against Governor Evers for certifying the election results as he is required to do per federal and state laws.

In the center ring of this circus of clowns is State Representative Ron Tusler, the chair of the Assembly's election committee, has scheduled a hearing about the elections for Friday.  Tusler has said that he is "unsure if Biden won the state."  To support his point, he spewed out all the same claims and conspiracy theories that have already been repeatedly debunked.

To further cement his place in the museum of bad clowns, the hearing he is overseeing is making a mockery of itself.  The witnesses that have been called include a Bradford Foundation-sponsored radio squawker and hack writer; a former right wing Supreme Court justice who was voted out; the two tainted election commissioners mentioned above; and a cast of thousands of no-name right wing puppets.

Notably absent are any nonpartisan election officials and any Democrats.

In other words, it's not exactly going to be a real hearing but more of a organized right wing echo chamber like Parler but in real time and in person instead of an anonymous antisocial social media platform.

This would be hilarious if it were not for the fact that they are going to try to use this parody of a hearing to change election laws for future elections and even try to change the 2020 results, if they can figure out a way to get it past Evers before Monday, when the Electoral College collects and counts their votes.

The question that I want answered by the likes of Tusler, Joe Sanfelippo and the others would be whether they consider their own election as fraudulent and resign from office because no one is sure they legitimately won their seats.