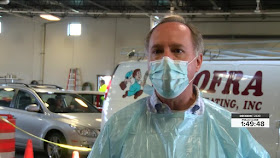 About this time last year, during the spring elections, Robin Vos was trying to convince people that it was perfectly safe to come out and vote in person despite the pandemic.  Of course, he muted his message considerably when he tried to do this while wearing full PPEs, despite the fact that he was not going to be in any contact with members of the public.

Fast forward to now and we see that Vos has become an anti-vaxxer. He put this picture up as his profile image: 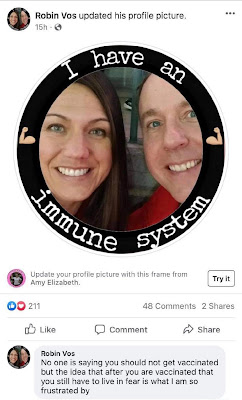 Now that frame around Vos and his mistress-turned-third wife, which makes them resemble two turds in a toilet bowl, is a common one used by anti-vaxxers.

As he started to receive severe blow back on that, he tried to backpedal by adding the comment that "No one is saying you should not get vaccinated but the idea that after you are vaccinated that you still have to live in fear is what I am so frustrated by" [grammatical errors are his].

The Democrats were quick to jump on Vos for his anti-vaxxer stance and his hypocrisy:

“It is disappointing and embarrassing, yet not at all surprising, that Speaker Robin Vos is now spreading doubts about vaccines on Facebook. At every turn, Speaker Vos has sought to sabotage our state’s response to the COVID-19 pandemic, and this latest erratic behavior is further evidence that nothing is off limits when it comes to Speaker Vos’s political games.

Melodie Conklin of the Wisconsin Examiner looked into it and found that Vos had managed to take a bad thing and make it worse by going back on Facebook and going on a screed, blaming 'hateful leftists':

“I can’t believe how liberals have to try and take everything and look for something negative to say.  I posted “I have an immune system” and they presumed I was saying it as a statement on vaccines.

The reason I posted it was because I am incredibly frustrated that the goal posts keep moving and it’s not based on science.

The message has been get the vaccine so we can return to normal but now they are saying restrictions have to remain in place for the foreseeable future?  Wear a mask outside?  Get a vaccine and you still have to shelter in place?

How can many get behind policies that seem to never get us closer to a return to normal after over a year of data that shows many of the opinions have been wrong but not one official will ever admit that?

Meanwhile, his fellow Republican legislators and other Branch Covidians circled their wagons around Vos, taking things from worse to utter inanity, including this tidbit by fellow lawmaker State Rep. Tyler August;

Defending Vos, Speaker Pro Tem Rep. Tyler August (R-Lake Geneva) went for an atypical GOP talking point of science: The left complaining about @repvos stating a scientific fact that human beings have immune systems would be hilarious if it weren’t so ignorant of them. Humans do in fact have immune systems. #followthescience”

Here's a news flash for Vos and August: Each and every one of the 7,400 Wisconsinites and half a million Americans who lost their lives because of the virus also had an immune system.

Other Branch Covidians also chimed in with utter asinine comments such as how it's not really a vaccine but genetic manipulation.  I'm a little surprised he forgot about the 5G chip that Bill Gates had implanted along with the shot.

Vos continued his screed, going from the inane to WTAF status:

Vaccines work by boosting the immune systems response to a virus.  If you don’t believe me look here – https://www.cdc.gov/…/conv…/understanding-vacc-work.html

So for the Democratoc Party [sic] and all of the hateful leftists who felt the need to comment or send me a message, please know that your ignorance of how things work only causes more people to doubt the effectiveness of the COVID19 vaccine.

Please – as I have said for months, consider the vaccine.  No one should force you to take it and I will never support that idea or a vaccine passport or work requirement.

How about instead, if we respect each other enough to say it’s a personal decision and I’m good with whatever choice those I care about make?”

That's the same argument he used against a statewide facemask mandate.  But I got some bad news for Vos.  It's not quite a personal decision as much as a socially responsible decision.

If Vos was actually following the science, he would have known that the vaccine doesn't necessarily mean you can't catch the virus.  It simply to keep you from getting deathly sick, out of the hospital and off a ventilator.  But even getting mildly sick from the virus doesn't appeal to me, or I'd imagine to most people, in the least.