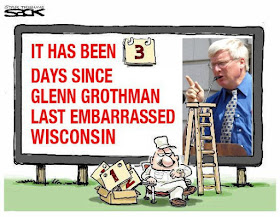 Glenn Grothman once again brings shame to Wisconsin by attacking Black women, accusing them of the "moral decline of America."  This episode stems from Grothman going on the floor of Congress to blame rapper Cardi B for her performance in this year's Grammys award show, in which she performed her hit song 'WAP," saying that it was "inconsistent with basic decency.

Grothman has a long history of blaming everything on Black people, especially Black women.  In the past he's attacked Kwanzaa, said that Black women would rather have children out of wedlock because they wanted that sweet, sweet welfare check for a couple hundred bucks per month, and justified voting for some of the most oppressive voter suppression laws in the country because when people vote illegally, the usually vote for Democrats.

This time, it really turns out that Grothman put his foot in his mouth after stepping in a pile of dog crap.  He confessed that he hadn't even watched the performance by Cardi B until after his one minute tirade about how improper it was.

To make things worse, Cardi B laid into him like he lays into a stack of free pancakes at a church festival. She tweeted this about Grothman:

This gets me so mad ya don’t even know! I think we all been on the edge this week since we seen police brutality back to back including watching one of the biggest case in history go down DUE to police brutality but wait ! This is wat state representative decide to talk about 🤔 https://t.co/k2ZBn9gONA

Mind you Nikkas can’t give a word about Jacob Blake or give him proper Justice but this part of the reason why !!!!! They giving seats to FUCKIN IDIOTS!!This is why people gotta vote ,elect better people cause you got these dum asses representing states . https://t.co/VkNHzv48Dy

I would be remiss if I didn't also point out that Grothman is a full-fledged MAGAt.  And I feel it's safe to say that Trump and his supporters over the past five years have been a larger problem to American society than any other population of people in the nation's entire history.
capper at 1:29:00 AM
Share