US Representatives Tom Tiffany and Scott Fitzgerald, both devout MAGAts and GQP, sent out a fundraiser letter in which they tried to compare Joe Biden to the late Hugo Chavez. 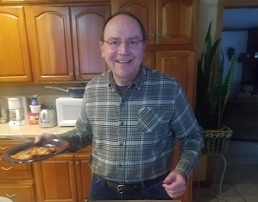 The report comes from James Wigderson at White Wisconsin, er, Right Wisconsin, who took over the site when Charlie Sykes left for the glamour and big bucks of national TV:

Congressmen Tom Tiffany (R-WI) and Scott Fitzgerald (R-WI) are asking for your money to prevent President Joe Biden from doing to America what Hugo Chavez did to Venezuela.

No, really. We can’t make this stuff up.

“It took Hugo Chavez years to push Venezuela’s once-prosperous economy to brink of collapse,” Tiffany and Fitzgerald wrote in an email to their fundraising list. “But just over 100 days into Joe Biden’s term, he and Nancy Pelosi’s ‘rubber stamp’ Congress are taking our country down that same dangerous road.”

The “road” the congressmen then describe is the shutdown of an oil pipeline due to cyberterrorism, which they claim is the fantasy of Biden, Pelosi, Michigan Governor Christine Whitmer and the rest of the Democratic Party.

“If they get their way, the gas lines and fuel shortages gripping parts of our country today could go national tomorrow,” Fitzgerald and Tiffany wrote.

Wigderson goes on to remind his readers of who Chavez was and what he did:

Let’s remember what Chavez actually did in Venezuela. He declared “economic war” on wealthy opponents, nationalized industries, used mobs to attack his opponents, violently suppressed the previously-free press, and arrested his critics. In addition, Chavez ran up deficit spending and instituted prices controls, resulting in shortages across the country (including food). In directing Venezuela’s foreign policy, Chavez preferred the support of dictatorships. At home, Chavez expressed his admiration for past dictators in South America and even employed Cuban and Peronist advisors.

Gee, doesn't that sound more like their beloved Trump than anyone else?

Obviously, Tiffany and Fitzgerald are hoping to appeal to their fellow QAnon conspiracy believers for cash.  Chavez is a popular bogeyman among that crowd since they believe that Chavez, who dies in 2013, was one of the lead culprits in "stealing" the election for Biden.

It's amazing how much cognitive dissonance they are willing to display so as not to upset their fragile sense of reality.